Thousands of unemployed young people across the North East could be stripped of benefits under tough plans in the Government’s Queen’s Speech.

David Cameron insisted the crackdown was designed to end youth unemployment, as he set out his plans in the House of Commons.

But Labour MPs said the plans effectively meant young people would be forced to work for as little as less than £2 an hour – payment far below the minimum wage.

The North East has the highest youth unemployment rate in England.

Office figures show 21.4 per cent of young people aged 18 to 24 are unemployed.

The figures cover people who are “economically active”, which means they are in a job or looking for work. Full-time students are not included.

This is a higher proportion than in any other part of England. It’s also higher than Scotland or Wales, and roughly equal to the Northern Ireland figure of 21.8 per cent.

Official figures also show that 4,000 people in the North East aged 18 to 24 have been claiming Jobseekers Allowance for six months or longer.

But under Government plans, anyone aged 21 or under will lose the right to this benefit – and be put on a new “youth allowance” instead.

They’ll get the same amount of money as before, up to £57.90 a week, but if they are unemployed for six months then they will be given compulsory community work such as making meals for the elderly or working for local charities – and they’ll lose the right to claim benefits if they refuse.

The Government says it plans to prepare young people for work and will create 200,000 new apprenticeships in the North East.

And Conservatives point out that the number of people aged 18 to 24 in the North East actually in work has risen by 13,000 over the past year.

David Cameron told the House of Commons: “One of the most important things we can do is give young people the chance of an apprenticeship and the chance of work.

“What we have done is expand apprenticeships and uncapped university places, so that there is no cap on aspiration in our country.

“We now want to go further by saying that every young person should be either earning or learning.

“Leaving school, signing on, getting unemployment benefit, getting housing benefit and opting for a life out of work—that is no choice at all, and that is why we will legislate accordingly.”

“This Bill will provide assistance to young people to earn and learn, and give them the skills which they need to have a long term future in employment.

“We need to address the skills gap and using apprenticeships will really make a difference to do that.”

“If young people are expected to work in order to get benefits then they should be entitled to the minimum wage.

“To tell them to work for £2 an hour is ridiculous. We have legislation which says there is a minimum wage in this country and that should be the minimum level people can expect.”

Conservatives will face a battle over plans to stop people aged 18 to 21 claiming housing benefit – with Labour MPs and other critics warning it will put young people who are forced to leave home because of abuse in danger. 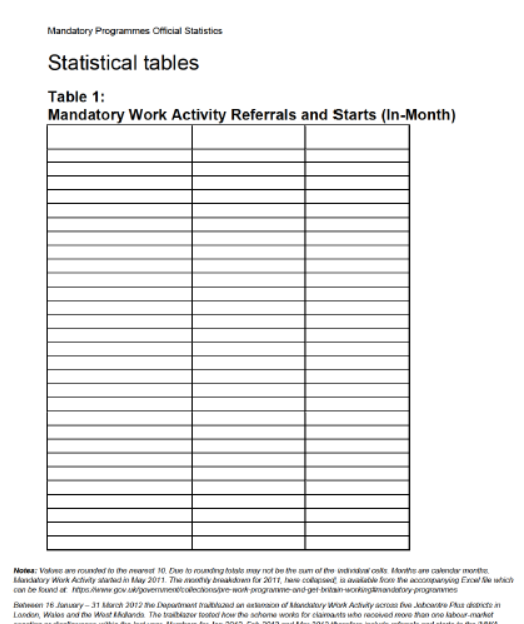 In the Queen’s speech this morning power crazed Elizabeth Windsor announced that her Government – her fucking Government – would introduce a new mass workfare scheme for those under 21.

She also claimed that new measures would lead to full employment, but what she really means is that people will be forced to work for the pittance of benefits.  Who’d have thought it?  The Queen of fucking England demanding her subjects labour full time for barely enough money to even eat.  Nothing changes, unless we make it change.

What she probably doesn’t know, although David Cameron does, is that workfare schemes are on the brink of collapse.  Most decent charities don’t want to be involved with workfare anymore after realising the horrifying impact of benefit sanctions inflicted on those who don’t want to work for free.  According to the latest Labour Market Statistics there were less people on unpaid work… 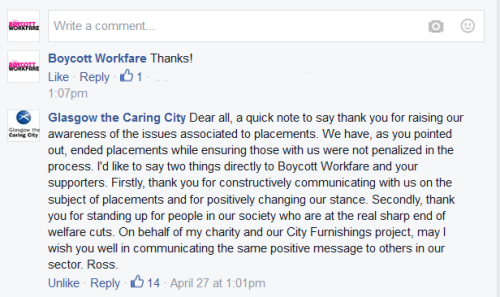 An astonishing piece of gutter journalism has been published by charity journal Third Force News which accuses Boycott Workfare of terrorism and says that charities have been blackmailed into pulling out of unpaid work schemes.

According to Robert Armour, the journalist behind the piece, three Scottish charities including Glasgow the Caring City, have been “blackmailed, intimidated and bullied by campaigners associated with Boycott Workfare”.  One charity goes even further saying anyone who challenges the campaign is “subjected to abuse and terrorism”.

The above picture is a message left on Boycott Workfare’s facebook page just two days before the article appeared and which shows that Glasgow the Caring City appear to take a very different view of Boycott Workfare to that presented by Third Force News.  They even encourage Boycott Workfare to communicate their positive message to others in the voluntary sector.  Which would be incitement to commit terrorism if…

ERSA are the trade body established to lie on behalf of the welfare-to-work companies like A4e and G4S who hold lucrative contracts to run workfare and forced training schemes.  In a frank statement on their website McHugh says that the use of sanctions is based on sending political messages rather than evidence of what works and that a more humane system is needed.

According to McHugh, current rules which mean welfare-to-work companies have no choice but to refer people for a benefit sanction for not carrying ‘mandated activity’  are ‘bonkers’ and that this causes inappropriate sanctions to be applied.  She also backs the recent call for an urgent review of the sanctions regime made by the Work… 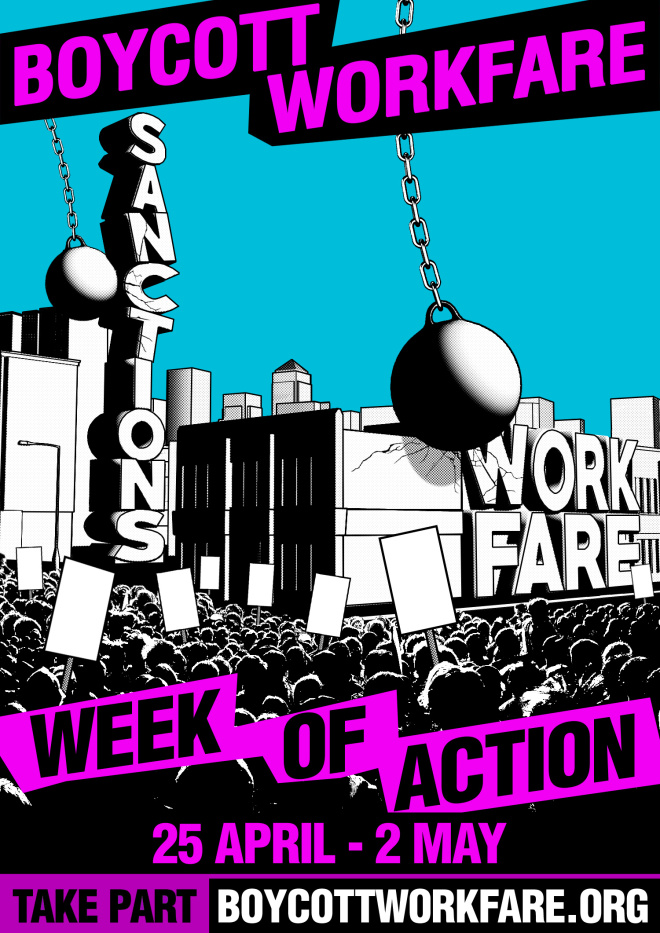 As the general election campaign gets underway we are already seeing politicians calling for more of the same policies. More workfare. More sanctions. Yet we know that these policies have been a total disaster. It is shameful that workfare and sanctions are supported by all the main political parties. This is why we are holding a week of action in the week before the election. We need your help to expose and challenge workfare and sanctions policies and the political lies that underpin them.

Workfare undermines paid jobs and wages and results in sanctions. It does nothing to improve the chances of people finding a job and exploits those forced to carry it out. Last year over half a million people had their benefits sanctioned. The number of benefit sanctions imposed by the DWP now exceeds the number of fines imposed by the courts. People are being…

Labour’s Shadow Work and Pensions Secretary Rachel Reeves has probably never done a real day’s work in her pampered fucking life.  After graduating from Oxford and then the LSE she was handed a non-job at the British Embassy in Washington before returning to the UK to work in the banking sector.  She is every bit as clueless and out of touch as the chinless toffs in government she claims to oppose.

This week Reeves and her creepy underling Shadow Employment Minister Stephen Timms have been boasting about Labour’s plans to bully and impoverish unemployed people with their Compulsory Jobs Guarantee.  And just like Iain Duncan Smith she is quite happy to bend the truth to further her benefit sanctioning agenda.

According to Reeves, long term unemployment has soared recently with “a staggering 224% increase in the number of people (25 and over) who have been unemployed for over two…

The DWP are currently tendering for a pilot scheme in Scotland which will see claimants on both unemployment and sickness benefits forced to attend training and possibly even workfare under the threat of benefits being stopped.

Around 450 claimants in the West of Scotland Jobcentre Plus District are expected to be forced onto the scheme if Jobcentre staff decide they have “low self esteem; and/or limited capability to manage stressful or challenging situations.”

Unlike the Work Programme, this scheme will not be aimed at people who have been on benefits for a long time.  Instead the tender documents state that those referred are likely to be people whose period of unemployment is less than 26 weeks, suggesting people could be sent from the first day of their claim.

Reposted from Morning Star on line

A4E claimed £1.3 million from the Department of Work and Pensions (DWP) for its Aspire to Inspire lone parent mentoring programme between 2008 and 2010.

While this money was not directly received by the employees, many of them were given bonuses for each person they helped into work or for meeting targets.

However documents apparently signed by candidates and employers to show successful job outcomes were, in fact, produced and signed by staff.

The fraud was exposed following a report by a whistleblower, which led to a DWP and Thames Valley Police investigation.

I was talking very recently with a group of people who are on a 30-hour-a-week workfare Community Work Placement (CWP) at at Haringey charity. Their workfare provider is the G4S subcontractor Urban Futures, finder of these 30-hour-a-week placements on which people must work or lose their benefits.

Anyway – one member of the group made a startling revelation as we spoke. This person said that until late December 2014, they’d been on a CWP workfare placement in the Marie Curie charity shop in Highbury and Islington.

The thing with that is – Marie Curie supposedly abandoned participation in forced workfare schemes a couple of years ago as a result of successful Boycott Workfare campaigns (shoutout to the Void here who reminded me MC had left).

Today is the annual conference of the Employment Related Services Association (ERSA), the trade body established to lie on behalf of the vile welfare-to-work sector.  They will be tweeting on the hastag #ERSA14 so join in and let them know what you think of their shoddy workfare schemes and brutal benefit sanctions.

Delegates are meeting at a luxury London hotel with tickets for the event costing up toa whopping $450 and a slap up meal promised this evening.  Companies like A4e and G4S will be joined by Employment Minister Esther McVey and her Labour counterpart Stephen Timms to discuss how to fleece even more money from the tax payer by pretending that unemployment is caused by unemployed people.

Boycott Workfare have called an online action to hold these parasites to account for their role in the UK’s biggest and nastiest benefit fraud.  Hundreds of millions of pounds  are handed over…