The Salvation Army‘s new regional pay structure came into force at the start of the month, bringing with it cuts in pay for hostel workers – including at the Salvation Army’s Swan Lodge in Sunderland.

The charity says the cuts are in response to changes in funding for homelessness services from central and local Government.

Clare Williams,  regional convenor of the union Unison, said:  “These changes will result in workers doing the same job in different areas of the country for different levels of pay, which in itself is unfair.

“However, it is aiming to achieve this by implementing severe cuts to pay and service conditions without properly considering the effects on its own workforce and the services it provides to vulnerable people locally.

“The charity says the changes are to secure future contracts for homeless services paid for by the Supporting People Grant.

“The irony is that the impact of these cuts upon its own staff will put many on the poverty line and some at risk of losing their own homes.”

Readers might like to consider the fact that the Salvation Army are also enthusiastic users of forced labour – unemployed  under threat of benefit sanctions –  to staff their charity shops.  Perhaps they have plans to extend forced labour to other areas of their organization.

More on the SA and unpaid labour here –

Perhaps we need a resurrection of the Skeleton Army –  a diffuse group, active  in Southern England, that opposed and disrupted The Salvation Army’s marches against alcohol in the late 19th century. Clashes between the two groups led to the deaths of several Salvationists and injuries to many others. 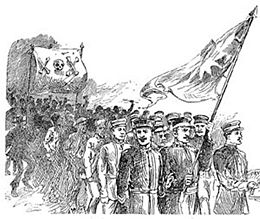