Len McCluskey, general secretary of Unite, called for collective bargaining to be reintroduced to arrest the decades long fall in the value of wages, and give workers a fairer share of the wealth they create.

He warned that over the past 40 years collective bargaining has fallen from covering 80 per cent of the workforce to just 20 per cent today, leaving millions of workers at the mercy of employers who are only prepared to pay poverty wages.

Speaking in the debate on the new economy at the Trades Union Congress in Liverpool,  McCluskey said:

“It was a Tory – Benjamin Disraeli – who said that Britain was two nations. He would certainly feel right at home today.

“Workers in our country are today facing the longest drop in their living standards since the 1870s when Disraeli was prime minister. But to be fair to him – he saw the class divisions in Britain as a problem to be solved. His Conservative successor in Number 10 seems to rejoice in them.

“Because every measure David Cameron and George Osborne take is designed to increase the squeeze on workers’ living standards and widen the already scandalous inequality gap.

“David Cameron used to talk of the Big Society. The truth is he’s created Two Societies – a society of Bullingdon Bullies, country suppers with Rebekah Brooks, tax cuts for the rich, a society which is a happy home for the hedge fund managers who fund the Tory party.

“That’s not so much the Big Society, more like the Greedy Pig Society.

“On the other hand there’s a society of people in fear – fear of losing their jobs or their homes, fear of paying the heating bills, fear over the future of the National Health Service, where the government strips away any protection the poorest can still cling to.

“The Tories will tell you that it’s all going to come right – that after six lost years for the economy we will all feel the benefits soon. But the truth is that trickle down has dried up.

“For the first time in anyone’s memory we have an economy which is apparently growing – while living standards for ordinary people are still falling.

“To misquote another famous Tory: ‘Never, in the field of human economics, has so much been produced by so many to the benefit of so few’.

“We need a social rebalancing and only trade unions can deliver that – because all the power is on one side of the negotiating table.

“Most economists now recognise that this is the biggest structural obstacle to sustainable growth in a modern economy.

“Collective bargaining can ensure that workers get back more of the wealth they produce. Trade unions stand for the productive economy and the people who are the real wealth-creators. In Downing Street they represent only the parasites.”

Child poverty, eviction, special dietary needs going unmet, ill health, street homelessness, depression, suicide attempts, self-harming, relationships fracturing, utilities being disconnected, people with mental health conditions being sectioned, claimants forced to beg, go through bins or steal to survive – all of these things have been well documented as the consequences of benefit sanctions.  And all of them are acceptable as punishment for missing a meeting with your fucking Work Programme provider the vile participants in tomorrow’s workfare conference believe.

Almost one million benefit sanctions are now handed out every year by Jobcentres and the welfare-to-work sector. Benefit sanctions are one of the main reasons so many families are queuing at foodbanks.  Children are not just going hungry, but without toys, clothes, days out, Christmas or birthday presents, all because their parent’s have… 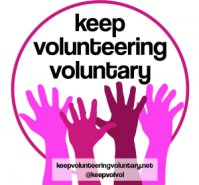 Unlike Help To Work, the new Keep Volunteering Voluntary campaign has already been a huge success.

Despite wildly optimistic claims from the DWP, today’s launch of mass workfare seems to be in chaos behind the scenes.  With barely any information yet available on the scheme it appears that the flagship Help To Work programme has no-one actually running it, no guidance for companies involved and no real plan to deal with the huge influx of claimants to Jobcentres from daily signing.

According to the BBC a mere 70 so-called charities have signed up to provide placements on the scheme which will involve forcing unemployed people to carry out 780 hours of unpaid work.  For ‘Help To Work to be successful, these charities will need to accept hundreds, or possibly thousands of placements each.  Predictably the DWP are not saying who the charities are.  So far the only voluntary sector organisation…

We might not have power, influence or money, but we DO have music, satire, poetry, humour, videos and other creative outlets… all good ways of fighting back 🙂

Weasels  From the Amazing @juxtaposed – Enjoy

Here and there a ‘socialist’ squeaks
Scared of its own shadow
That’s the way the half-hearted play
Pop! goes an M. O.

Everything the idiots bring
Is tainted, spun and crafted
That’s the way the weasels prey
Pop! we are shafted. Are the Tories really planning to cut Tax Credits because Iain Duncan Smith thinks struggling families spend them on drugs?

That’s the astonishing claim made by the Daily Telegraph after focussing on a part of Iain Duncan Smith’s speech this week which went unreported elsewhere in the press and was not included in the transcript published by The Spectator.

According to The Telegraph:  “Mr Duncan Smith indicated his party is preparing to review tax credits, which are paid to people on low incomes or with children. The system was introduced by Gordon Brown and has been criticised for subsidising low wages. They will cost £28bn this year, and the cost is forecast to rise £35bn by 2018/19.

He said the cash pushed people above an “arbitrary” poverty line on paper but failed to change their lives, and some “unproductive” people spent the extra money on drink and drugs rather than…