A 32 year-old homeless victim of the hated Bedroom tax had to have all his toes amputated after being forced to spend winter living in a tent, it has been reported today.

Mitchell Keenan, from Skelmsdale in West Lancashire, was rushed to hospital by family members after being discovered with severe frostbite.

Mr Mitchell and his 62 year-old father Keith were evicted from their four-bedroom home after falling behind on rent repayments, due to being hit by the government’s bedroom tax.

Keith has since been diagnosed with a range of serious health problems including scabies, dementia and malnutrition.

His sister Dawn Doyle, 54, tried to find emergency accommodation for the two men “but nowhere would take them”, she said.

“It’s absolutely outrageous what has happened to my brother and nephew.

“They lived in their home for thirty years and got into difficulty last year.

“They both have neurological conditions and disabilities and kept missing job interviews, so the problem got worse and worse.

Unable to find suitable accommodation, Dawn was eventually forced to buy her brother and nephew a tent.

Dawn says she was unable to house her relatives due to disabilities and being a single parent, but added that she had provided the men with food parcels from a local food bank.

“I felt awful that I couldn’t take them in, but I’m a single parent, with my own disabilities and I just knew I couldn’t cope.

“I tried my best for them and contacted so many different organisations, but just kept getting turned away.

“Social Services said they couldn’t come and assess them because they were in a tent – it was just farcical.

“When we saw Mitchell’s toes we were horrified, that this can happen to people in the 21st century is disgusting.”

“In July they lost their home and I tried everywhere to get them accommodation but nowhere would take them.”

“The bedroom tax is an awful thing, it’s affecting people’s lives all over the country and needs to be repealed.”

West Lancashire Borough Council has now provided Mitchell Keenan with temporary accommodation, while his father Keith has been given supported housing.

A Department for Work and Pensions spokesperson said the men “continue to be supported through benefits and by jobcentre staff”.

They added: “We have given their local council hundreds of thousands of pounds to support vulnerable people through our housing benefit reforms”. 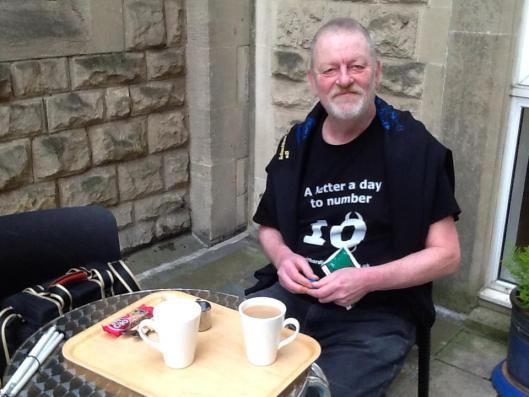 Energising: Keith Lindsay-Cameron prepares to take his case to the police.

An activist from Somerset is raising his own ‘Shoestring Army’ to crowdsource funds and mount a legal challenge against the government’s new Claimant Commitment for jobseekers, after police said they were unable to arrest Iain Duncan Smith and Lord Freud for breaching the Human Rights Act.

Keith Lindsay-Cameron, of Peasedown St John, near Bath, was advised to obtain the services of a solicitor and raise a legal challenge in the courts after he made his complaint at Bath police station on Friday (May 2).