Fast food outlets are treating employees like slaves, according to campaigners.

A global day of action saw people across the world take to the streets to highlight the plight of workers in the fast food industry, many of whom are on zero hour contracts.

Campaigners in the UK were largely organised by the Bakers Food and Allied Workers Union (BFAWU) who are calling for a £10 hourly minimum wage and the scrapping of zero hour contracts for those working at outlets like McDonalds, Burger King and KFC.

In Darlington, protestors from BFAWU and Darlington Against Cuts manned a stall close to McDonalds on Northgate and encouraged passersby to take up the fight against “slave labour”.

“Fast food workers can go to work and be sent home with no pay despite paying expenses to get there or arranging child care.

“It’s fundamentally wrong and harks back to the shipyard days when people would stand outside waiting for work – it’s disgusting and needs to change.”

“I worked in Darlington on a zero hour contract and had my work cut from 40 hours a week to 18.

“That’s still above benefit levels so I couldn’t claim those and it’s absolutely disgusting, they’re treating people like slaves.

“People are locked in these contracts as they rely on the money but they’re scared to speak out as if you upset your boss, you won’t get the hours.

“The only way to combat this is to get organised and fight back.”

A special “tax” on fast food takeaways to help fund obesity programmes and deal with litter left by customers has been called for in Newcastle.

The suggestion follows the city being the first in the country to introduce a late night levy on bars and clubs to help police deal with drink-fulled crime and disorder.

It was proposed by Lib Dem councillor Greg Stone and follows a recent controversial planning application by McDonald’s for a site near Kenton School, the city’s largest secondary school with around 2,000 pupils.

The application is to go before the council’s planning committee later this month and has provoked a storm of protest from residents, local councillors and the head of Kenton School, David Pearmain.

In a motion put to a full Newcastle City Council meeting, Coun Stone asked for it to investigate the feasibility of asking businesses with negative socio-economic effects to help offset these by paying an annual “sustainable retail levy” to support initiatives such as local high street improvements, anti obesity schemes or financial inclusion projects.

It also asked for the council to consider greater controls on changes of use to things like hot food takeaways in identified local retail centres and streets.

The Lib Dem Opposition group’s motion highlights the findings of the council’s own Retail Health Check Analysis, which was instigated by the Lib Dem administration in 2010.

He asked for a report to be carried out to assess how the council is progressing with implementing its recommendations.

Coun Stone said the issue of local retail vitality and the “healthiness” of high streets is a concern, and the number of takeaways in the city is continuing to proliferate.

He said: “Local communities should have more say. I don’t want to ban takeaways but they do affect the local way of life and can lead to later problems.”

He said takeaways contributed to “toxic High Streets”, which also included the effect on them of pawn shops, money lenders and bookmakers.

Labour Coun Joyce McCarty rejected the levy idea, saying: “We don’t want to see another tax on small businesses. If we’re going to try and work with the businesses we need to look at issues case by case and deal with it as the need arises.”

There were also criticisms of the easing of planning laws by the Coalition Government which makes it easier for retail outlets to change to fast food takeaways.

In the amendment to the Lib Dem motion, which was accepted, the council agreed to continue to support local retail diversity and vitality as well as the introduction of “localist” retail planning policies to improve the health and vitality of local retail centres.

> From the company whose employment  policies gave us the term McJobs, we now appear to have a McEconomy…

McDonald’s and its suppliers serve up £10million a year for Wearside, says the fast food giant.

The firm has commissioned an economic report to mark its 40th anniversary in the UK, which it says shows the business and its suppliers make a combined £10.2million annual contribution to the Sunderland economy.

The ‘Serving the UK: McDonald’s at 40 Report’ was researched by Development Economics to assess the overall contribution McDonald’s has made to the UK economy, local communities, its employees, customers and suppliers since it first started operating in the UK in November 1974.

The report found overall the business and its supply chain was worth an estimated £2.5billion a year to the UK economy.

> Or, as one one person commented on the Echo website –

Yes, look at all the jobs created by McDonalds in: the Coronary Care Unit; the Diabetes Clinic.

Add up the cost to the health of Sunderland’s school children: McDonald’s claims about its input into the economy does not seem so positive. 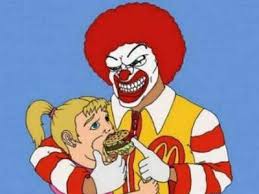 The RMT, and London Underground staff in particular, have long had a reputation as being among the most militant groups of workers in the UK, so the news that tube workers are taking strike action isn’t hugely surprising in itself. What’s more interesting is the kind of action they’re taking: a revenue strike.

This term isn’t a widely used one, and they explain what it means here: